The PhraseBot app (www.phrasebotapp.com) offers different kinds of practice and progress tracking with sets of flashcards imported from the Quizlet website (www.quizlet.com).

There are many sets of Japanese flashcards already on Quizlet, and you can also easily make your own by inputting your data or uploading a spreadsheet.

There are often sets of flashcards already available on Quizlet for common textbooks, like ‘Minna no Nihongo’ and ‘Genki’.

The PhraseBot app can be downloaded for free on the iPhone app store for iOS devices, or from Google Play for most Android devices (some are not compatible).

Game screen overview
A cue is shown at the top and the user has to spell out the target word by connecting the tiles. The lower box shows a symbol for each tile contained in the answer, and if the player needs a hint they can tap this box to be shown the answer. The player’s score is shown on the left, with the target score to pass the level shown in the circle. 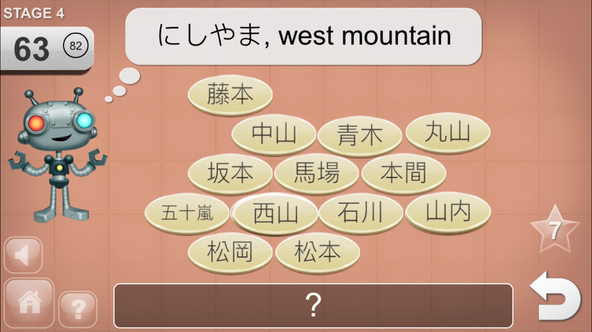 The number of words remaining in the stage is shown by the number on the star on the bottom right. The ‘undo’ arrow can cancel a tile selection if the user has chosen the incorrect tile to begin with.

N.B. In this game, the whole target word is shown on one tile.  You can choose in ‘Settings’ whether to practice with either a full word (up to 4 characters long for best display) on each tile, or a single character on each tile.

There are various modes that also allow practice of kana, single kanji, compounds or even sentences, which we will now look at one by one.

Playing with hiragana/katakana words
This example shows how a cue can include a picture (the cue can be text, picture or audio) 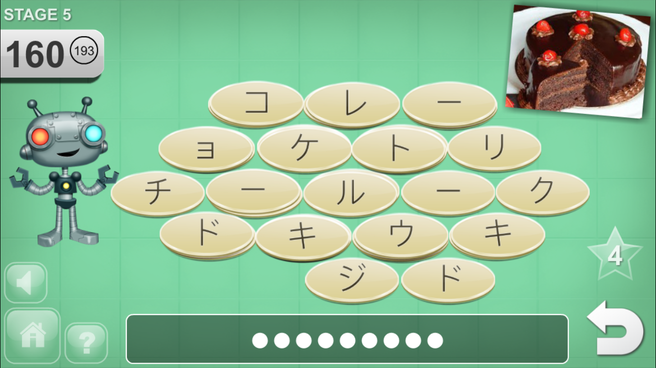 Single kanji or kanji compounds
This is great kanji reading practice which is both more interesting and challenging in this format of combining kanji rather than the usual standard multiple choice quiz. 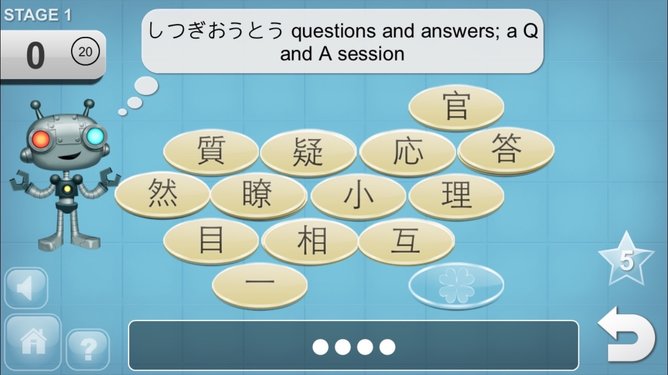 Sentences
To use sentences in PhraseBot, the target text in the Quizlet flashcards needs to separated with spaces e.g. ‘私  は  ランチ を  食べました’. 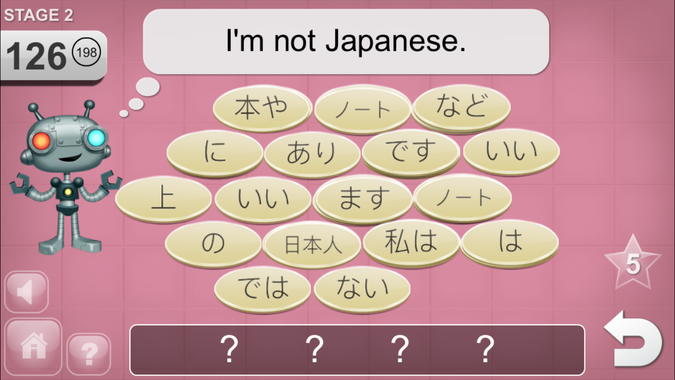 There are some sets that have already been prepared like this that can be downloaded from the Quizlet website, such as this set for JLPTN5 grammar:
https://quizlet.com/124707232/jlptn5-grammar-j-e-sentences-with-spaces-for-phrasebot-flash-cards/
Note that the ID number 124707232 can be seen in the URL, and this number can be input in the ‘Search Quizlet’ search field to import this set into PhraseBot.
For further details on how to import lists, please consult this page, or the ‘Help’ screen in the app itself. Please also feel free to contact me by email for help at kanjigames@outlook.com.