How to Play Kanji Crush

*N.B. On the web version all sets are unlocked - the mobile version unlocks them all with one in-app purchase.

In this view and the Bushu and Onyomi views, you can tap on a kanji to get additional information  in a popup box. Tap on the left box to see the bushu information. Tap on the right box to cycle through compound words containing the kanji  (n.b. meaning/reading info for each compound is hidden until you tap again, to help you quiz yourself!)

To mark any kanji as ‘known’ so that it will not be used again in the game, tap it and hold for a second and you will see the kanji turn a darker shade.

When a target is matched, it is highlighted on the 'Kanji to Match' list below the tiles until all have been achieved and a special sushi tile appears. The target list is reset and the player continues, with the aim of getting at least 3 sushi tiles on the board to match and win the game.

The 4 targets to match are displayed below the tile board. They can be single kanji, or radicals or onyomi, depending on the game mode set in ‘Options’.

i) Same Radical: Match 3 identical kanji. The actual kanji to match are displayed below the board, and they all share the same main radical. This mode can help the player to distinguish similar-looking kanji, and form connections between kanji based on their radical, onyomi and reading in order to help remember them.

ii) Same Onyomi: Match 3 identical kanji. The actual kanji to match are displayed below the board, and they all share the same onyomi. This mode can help the player to group together kanji with the same onyomi, to form connections between the kanji, and their onyomi and radicals.

iii) Match by Radical: Match different kanji that contain the same main radical. The radical on which to base the match on are displayed below the board. This mode can help to build an awareness of the components of the kanji. N.B. You can check the radical for any kanji tile by selecting it and tapping the left-hand info box. The radical info appears in the right-hand box.

iv) Match by Onyomi: This is the hardest mode, requiring the player to match different kanji based on one of their onyomi. This can help the user mentally group together same-onyomi kanji to remember them better. N.B. The player should also refer to the right-hand info box below the game to see the onyomi  used in compounds.

If there are no further matches on the board, the game ends and you can choose to play the game again with the same set of kanji, or to review the kanji from the game.

If you win the game by matching 3 sushi tiles, you go directly to the Kanji Review screen. 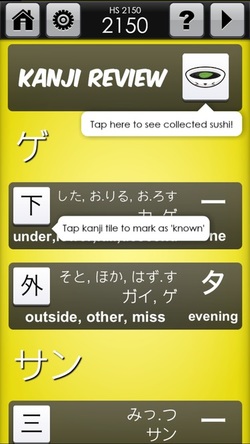 3) Review screen
After the game, you will go to a ‘Kanji Review’ screen where you can see all the kanji that appeared in the previous game.

Check any kanji you are not familiar with, and take the time to check some compound words in the right-hand information box for each kanji listed.

You can tap on a kanji tile to mark it as ‘known’, from which time it will be displayed on your main screen in a darker shade and not be used in any further games.

Tap on the saucer next to the 'Kanji Review' title to go to you 'Sushi Collection' page showing all the sushi you won from games! 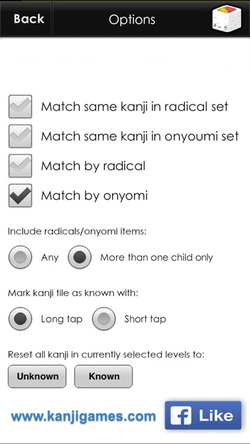 4) Options
a) ‘Game Modes’ (see above for descriptions)

b) ‘Only include sets with more than one child kanji’
There are many radicals and readings that may apply to very few kanji (especially if you have only selected a few kanji levels). Use this setting to prioritize sets with multiple kanji representing the radicals/onyomi. (However, the ‘Match by Radical/Onyomi’ modes  may be difficult enough even without doing this!)

c) ‘Switch Short/Long Tap’
If you want to focus on only kanji you don’t know, you may want to toggle many kanji on your main screen to ‘known’ – if so, temporarily set this to ‘short tap’ to make selection more convenient.